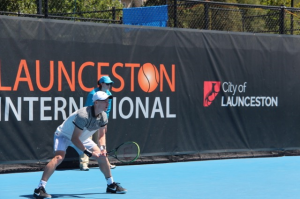 I am in Shanghai, China playing the Challenger event here. I don’t play until tomorrow Wednesday 7th September 2016.

I lost a tough match last week, tried my best, but although I felt I pushed him hard, my serve let me down and lost the match in 3.

Surprise though, I get another chance tomorrow against the same guy.

China’s Wu Di will compete in the ATP Challengers Tour which will be held in a campus in Songjiang District. — Dong Jun

ATP Challengers Tour will be held at Shanghai University of International Business and Economics in Songjiang District from September 4 to 11. The aim is to promote the sport among students.

The Tour, with a total prize money of US$50,000, will feature male players ranked between 50 and 300. The winner will be awarded 80 ATP ranking points. The best Chinese players will be given wildcards to the 2016 Shanghai Masters next month. China’s top male players Wu Di, Zhang Ze and Li Zhe will all take part in the event.

The event will be held in the campus for two years.