Meeting Australia’s most popular breakfast announcer Alan Jones and ex – coach of Australia’s National Rugby Union Team the “Wallabies” from 1984 who lead the victory in the 1986 Bledisloe Cup was a huge highlight for me. Alan gave me inspiration and even more motivation to work hard,  Alan to me is the most approachable and encouraging man to meet.

Alan has received a Queen’s Birthday Honour – an Officer of the Order of Australia (AO) partly for his service to the media and sports’ administration, but he also helps many charities which I hope to do so one day as well, he helps Youth off the Streets, the Children’s Hospital, Starlight Foundation, the Sir Edward Dunlop Medical Research Foundation and the Heart Research Institute and helps support many more community issues. I felt truly privileged to meet such a great man and have kept his words close “go for those lines”. 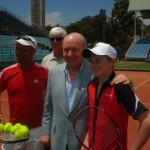