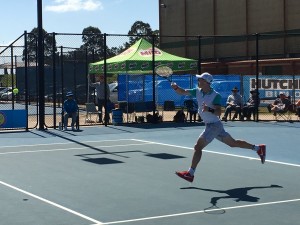 This week I made it through to the Final of the Cairns ITF Futures event. I started really well in the Final, and then lost my way early on in the second set and will be first to admit that “I got complacent and looked too far ahead” before I knew it, I was 0-2 down. Chris played really strong and got the better of me and never gave in.

I take a lot of positives out of this week and the last week, and that is that my serve is improving after extensive work on that part of my game before I left for these two ITF events.

I now look forward to next week a Challenger event in Traralgon, Victoria, which is good for me, it is close to home and Peter Luczak my coach will be with me again at this event. Onto next week and a good start for me to the Australian Summer of Tennis. 🙂 thanks for everyone for their support!

Chris O’Connell has overcome a 0-6 start to take the Cairns Pro Tour title over Blake Mott.

After dropping the opening set without winning a game, the third seed righted the ship to eventually claim victory 0-6 6-2 6-4 in just under two hours.

“Blake came out all guns blazing and I really didn’t know what hit me,” O’Connell, a previous Cairns semifinalist, said.

“Everything was going a million miles an hour and before I knew it, the first set was over.

“I really had to regroup and think about what I needed to change up, but I seemed to turn it around quite quickly.

“It was quite a strange match, very up and down, but I thought I had the better of the second set and then the third set was anyone’s game again.

“I was lucky enough to get through it in the end.”

The pair last met in a February Pro Tour final in Port Pirie, with O’Connell also taking the honours then in three tight sets.

Mott had just enjoyed a break-out ATP Challenger win in Launceston, but since then O’Connell has had some success of his own, reaching a semifinal at the same level in Sibiu, Romania, just last month.”